Our Museum has an extensive collection of wartime memorabilia from the Boer War through to recent conflicts and peacekeeping operations.

Please call the RSL to book your table now!
Every Weekend Is A Different Menu
You will NEVER see a dish repeated on our Specials 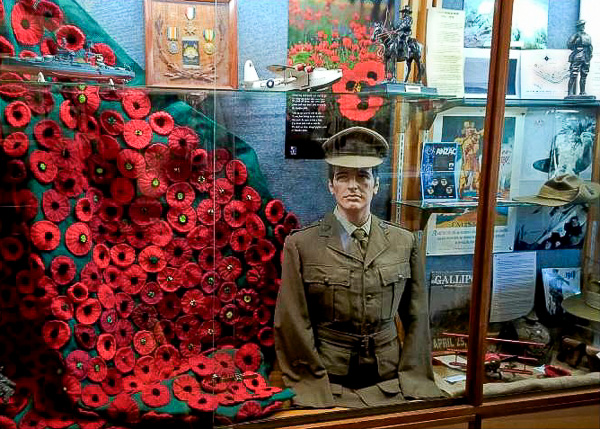 I was honoured to be able to plan and gather together this display for Remembrance Day.

As a researcher and historian of 58 years, I am passionate about the legacy we enjoy today because of the sacrifice of all who served in every theatre of war.

I wanted the collection to reflect Navy, Army and Airforce and the men and women who served – the proud Light Horseman and the framed medals from WW1; the Captain’s uniform and the poignant statue of a soldier carrying his injured mate in New Guinea for WW2; the picture of the nurses; the ship and the plane.

But overall, I wanted the main feature to be the poppies – those beautiful and heart-wrenching flowers of the battlefields that have come to signify the blood which was spilled, not only in WW1 and 2, but in each and every conflict since those times.

Whenever we see a poppy or a piece of rosemary, we should pause and turn our thoughts not only to those who never came home but also to the many who returned bearing visible and invisible scars for the rest of their lives. They all deserve our remembrance, our thanks, and our deep gratitude for giving their all, so that we may live in peace.

On November 11th, we will remember them……….. Lest We Forget. AEnone.

In August 2019, The Running Rabbits Military Museum was presented a beautiful, hand-painted mural in memory of the ANZAC soldiers.

For the last month and a half, class 11B at Mountain District Learning Centre have been working on an ANZAC mural with materials that have been generously donated to the creative students. The students were asked to think about the mural beforehand and agreed on the design together. The final masterpiece features vibrant red poppies around the border, the hats of the soldiers in the foreground with a bold sun rising in the distance. Though the main focus of the beautiful mural is the silhouette of a soldier playing the Reveille on a trumpet.

The student’s created the mural to pay respect to the ANZAC’s who lost their lives in war and remind the community of the hope of a new dawn. The mural will be mounted at the Upwey RSL with the appropriate signing from the VCAL students of MDLC. Thank you all very much for your wonderful, thoughtful contribution to the community! 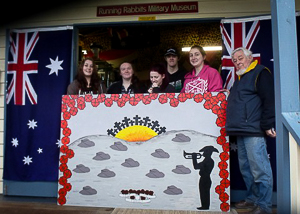 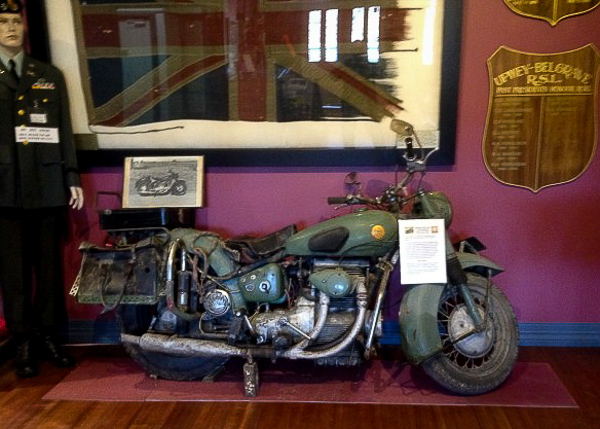 A new piece of history is on display at the Upwey RSL, a mist green Sunbeam S7 motorbike kindly loaned to the running Rabbits Military Museum for display by Garry O’ Connor. The Sunbeam S7, which was manufactured from 1946 and completed in 1956, was purchased brand new by German immigrant George Kunick just after World War 1.The motorbike was used to deliver mail to the Australian Army bases. Kunick used the bike every single day until several weeks before his death in 1984, aged 82 years. The Sunbeam S series, 1946 to 1956 was based on the BMW R 75 motorbike which was captured in WW2. British designers felt they couldn’t copy the enemy machine,  it was decided that some changes would be made when building the Sunbeam S7.

An inline 500 CC twin-cylinder engine replaced the BMW horizontal opposed motor and a worm drive on the rear wheel replaced the BMW crown wheel and pinion. The result? High wear of drive components and extremely poor reliability. The unusual engine layout was certainly the S7’s most notable feature, resulting in extremely poor sales and mechanically unsound.

The inline engine made this technologically feasible (flat-twin “boxer” engines on BMW motorcycles had already used shaft drives.)Before long, the Sunbeam S7 was improved and sold as the “S7 Deluxe.” The new model was not only available in black, but also in the “mist green” shown on the motorbike in the Upwey/Belgrave RSL’s foyer. The simple answer was to detune the motor and call in a gentleman’s router. This created a bike that was extremely underpowered, however, its balloon tyres, oil dampened front forks, sprung heel rear suspension and rubber motor was comfortable, quiet and could be ridden at long distances, cruising up to 80mpH.

The Sunbeam S7 will be on display in the main foyer of the RSL over the next few months, which is sure to excite many bike lovers out there!